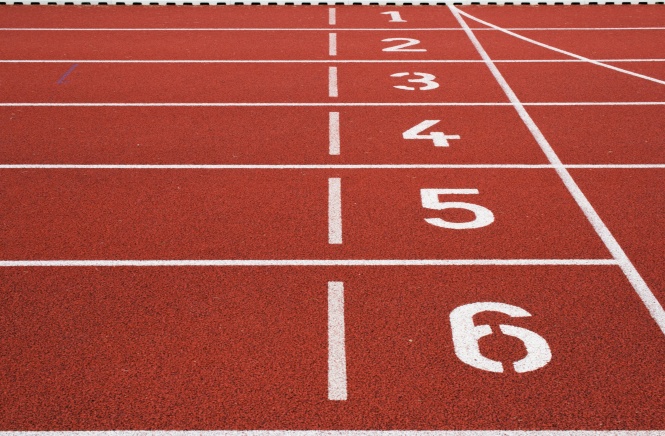 A few months back, one of my kids received a homework assignment they were struggling to complete. As minutes turned into hours, frustration mounted.  After much huffing, puffing and other unintelligible grumbles of annoyance, the child in question said, “My friend so-and-so doesn’t have to work this hard to get the answers right! I know for a fact this subject comes easy to them!”

That’s when I knew it was time for me to tell this little one an important fact of life.

You’ve got to run your race.

It’s really tempting to get hung up on what other folks are doing and how they’re doing it, but this line of thinking rarely works in our favor. In fact, it usually accomplishes the opposite. When we get sidetracked looking at other people, we can’t adequately focus on our own goals and tasks at hand, which diminishes our progress and compromises our momentum. When we evaluate ourselves based on the lives of others, we’re in danger of arriving at the incorrect conclusion that life is easy for them and extra hard for us. And we can be left feeling like we’re missing out on something, or that we’re not good enough or smart enough.

I’ve had several times in my life where I talked myself out of doing some really great things because I was super intimidated by the “so-and-sos” of the world and failed to focus on my own unique journey.

Have you ever watched an athlete compete in a race? Where do they usually direct their attention? Not to the left. Not to the right. Straight ahead, right at the finish line.

A photographer at the 2016 Summer Olympics illustrated this concept perfectly when he captured  US swimmer and gold medalist Michael Phelps barreling down his lane in the 200-meter butterfly. His gaze was straight ahead, laser focused on the completion of the race. Beside him, South African swimmer Chad Le Clos took a different approach. Somehow, his focus drifted from the work that needed to be done in his own lane and his attention was now directed at Michael Phelps. Le Clos had likely begun the race with his eyes fixed on the finish line, but the activity of others became a distraction.

Are you focused on the finish line or your friends?

Is it time to shift your focus from the happenings of the people around you and re-calibrate toward the goals that God has planted in you and expects you to accomplish?

If we’re brutally honest, I think we spend quite a bit of time in the “small-minded” bucket, sizing up what’s going on in other people’s lanes. When your BFF from high school posts the 468th pic of her and her husband on Facebook having their storybook date night with a comment about how her husband is pretty much perfect in all the ways that matter, you peek over into her lane and determine how your relationship, or lack thereof, measures up.

When a former co-worker invites you to the grand opening of her new business, you glance at her lane and try to figure out if what you’re accomplishing in life comes even close to what’s she’s accomplishing in hers.

When a family member invites you to a housewarming party in the most desirable part of town, you take an extended look into her lane and even catch yourself daydreaming about what it would be like to live life in her lane rather than your own.

And next thing you know, you’re deceived into believing that the highlight reels of other people’s lives are all there is to their stories and you’re the only one with real issues.

Isn’t that a depressing and discouraging way to live? Well, let me offer you this: Run your race. God has launched you on a one-of-a-kind, tailor-made journey just for you. It has peaks and it has valleys. But it also has the perfect mix of sun and rain that will allow you to grow and flourish, if you’ll embrace the process. The only catch is that you and I must keep our eyes focused on Christ every step of the way.

“Let us run with endurance the race that is set before us, looking to Jesus, the founder and perfecter of our faith…” – Hebrews 12:1-2

Withdraw and retreat from the deceptive game of comparing yourself to others. Because guess what? You can’t compare you to anyone else. Do you know why? Because you is in its own unique category. You and everyone else are like apples and oranges – they’re just too dissimilar to compare.

Here are a few practical ways to run your race:

Take in the scenery

God has given you gifts, talents, abilities and all sorts of other good stuff! You’ve just got to be willing to point it out and take it in. Sure, there might be some less than desirable circumstances in your life, but for the one thing that’s flourishing, revel in it! Enjoy and appreciate the pleasant aspects of your journey.

Do social media or other interactions ever take you across the line of fun, engaging, informative activities into the realm of envy, jealousy, discouragement and defeat? If so, don’t be afraid to take a break from it all to get your heart and mind back in line.

What is it that God wants you to accomplish this year? This month? This week? Fix your eyes straight ahead on what you have been called to do, prayerfully create a plan and get to work.

What’s one thing you would like to change in order to run your race more effectively?

5 thoughts on “Run Your Race”